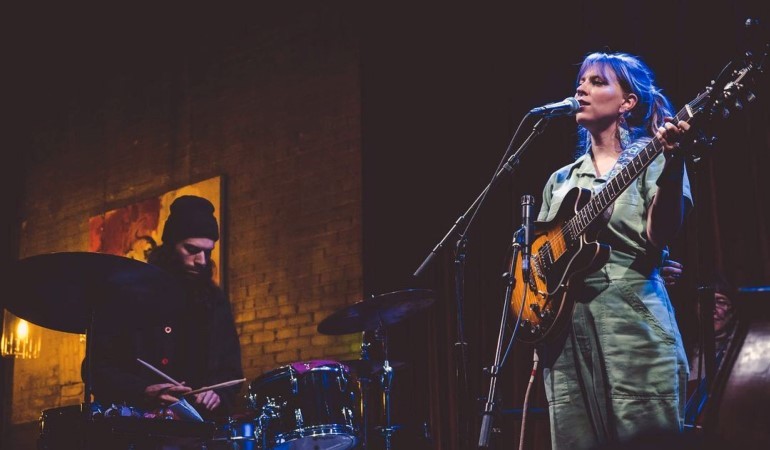 Join us for the 4th annual AppleJAM, featuring a concert by Humbird, as well as a variety of family-friendly activities highlighting apples. Celebrate the 100th anniversary of the Haralson apple, which was introduced by the University of Minnesota in 1922, with apple bingo, lawn games, a scavenger hunt and apple-themed concessions, including beverages from Excelsior Brewing Co. Local band The Z's will open for Humbird at 5 p.m., and Humbird will perform from 6-8 p.m. Bring a blanket or lawn chair to enjoy the show from the Farm at the Arb event lawns.

Inspired by the crystalline chill of the north country she calls home in Minnesota, Humbird (Siri Undlin) combines a wintry longing with the warmth of a familiar folktale. Humbird’s music moves between experimental folk and environmental Americana to embrace the unexpected. The music invites a refreshing dissonance into the house. It leaves bread crumbs along the path and reflects light back at the stars.

Siri Undlin witnessed the power of storytelling in her childhood home and began writing music and performing in church choirs and in Irish ensembles from a young age. Her voice, which contains the unwavering fortitude of hymnal melodies, reveals her traditional background.

In 2019, Humbird released the critically acclaimed, debut full-length Pharmakon, which introduced us to Humbird’s songcraft and harmonic folk style The release garnered millions of online streams and a wide range of accolades, including 89.3FM The Current’s “Best Local Albums Of The Year”, one of City Page’s “Picked To Click” Awards, a “Best Minnesota Albums” nod from the Star Tribune, and a showcasing artist designation at SXSW in Austin, Texas.

Humbird’s sophomore record, Still Life (October 2021), has received enthusiastic praise from within the folk world — awarded as one of Kerrville Folk Fest’s New Folk winners for 2021. “Leave it to Minneapolis indie-folk strummer Siri Undlin to find beauty, peace and hope during the tumult of 2020,” writes Chris Riemenschneider of the Star Tribune. “'Still Life,’ her second full-length album as Humbird, was mostly written and recorded in the house where she waited out quarantine. Songs range from the yearning, Lissie-flavored rocker ‘Plum Sky’ and the raw, George Floyd- and riots-reflecting ‘May’ to one of the most moving COVID postscripts yet, ‘Pink Moon for John Prine,’ all rife with Undlin's soul-punchingly poetic style.”

Singer “Carol Z” teams up with husband/bass player Billy Z to form the dynamic sounding duo “The Z’s!” The couple met in their 20s while in different bands, different states and different colleges, but music and lasting love kept them together as a duo for life. They play everything from light jazz to modern pop with lots of favorite ‘70s hits.

The main Arboretum entrance will not be used for this event. If you go to the main entrance, they will redirect you to the above address.